The Spirit Siphon is out now! 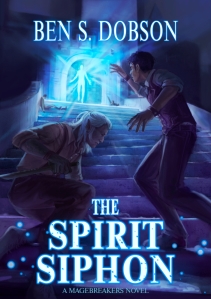 It’s been a rough year with a bunch of delays on the book, but at last I can happily say that the fourth Magebreakers novel is out! The Spirit Siphon is available now on Amazon.com, Amazon.ca, Amazon.co.uk, or various other Amazons of your choice. I hope everyone enjoys Tane and Kadka’s continued adventures!

When an airship crashes under mysterious circumstances, the Magebreakers find themselves embroiled in an investigation that takes them across the Audish Channel to foreign shores. In Belgrier, many blame Audish sabotage for the accident, and for the death of the influential nobleman on board—a dear friend of the Belgrian Kaiser. And if Tane and Kadka can’t prove otherwise, it could become a diplomatic catastrophe.

But the suspicion of a government that views all Audlanders as dangerous pro-magical radicals isn’t the Magebreakers’ greatest concern. Nor is the constant obstruction of the Belgrian Guardswoman assigned to supervise them. It’s the possibility that an outside hand is influencing events—an enemy they’ve encountered before.

And if the would-be emperor gets his way, it’s going to mean war.

I'm a fantasy author and an all around swell guy.
View all posts by bensdobson →
This entry was posted in Uncategorized. Bookmark the permalink.

4 Responses to The Spirit Siphon is out now!