The Dragon Machine is available now

Posted on November 7, 2018 by bensdobson 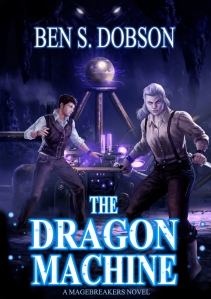 I’m pretty behind on this, but The Dragon Machine is available now! Grab it in paperback or ebook formats on Amazon!

A missing girl leads the Magebreakers into a deadly race, with her life as the prize.

Thaless is still reeling from the actions of the assassin known as the Emperor’s Mask, and in the aftermath, believers in magical superiority have been greatly emboldened. When a goblin girl named Tinga Vreeg goes missing, it seems like a tragic consequence of the atmosphere of hostility and anger toward the non-magical. But when Tane and Kadka investigate, they find a much deeper mystery. Tinga isn’t the only one missing—and she might have been on the trail of something important herself.

Maybe something that can explain the impossible strength and speed of the killers trying to track her down. Or the silver fire burning in their eyes.

But one thing is certain: if Tane and Kadka don’t find her first, someone is going to make sure that Tinga never tells anyone what she knows.

I'm a fantasy author and an all around swell guy.
View all posts by bensdobson →
This entry was posted in Uncategorized. Bookmark the permalink.